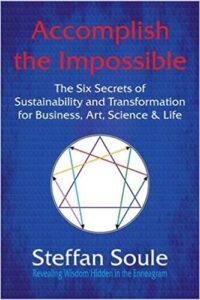 “The beauty of Steffan Soule’s book, Accomplish the Impossible, is that he really sees the magic in the ideas of the enneagram, or as he calls it, the Nine Term Symbol.

For me, (and I assume for all those who have penetrated the depths of this symbol enough to have written about it) there was once an “ah-ha” moment, an epiphany, when we first cognized how the enneagram actually applied in our lives – when we saw in an unmistakable way that the symbol not only can accurately describe a process, but can mysteriously predict many aspects of which we were previously unaware.

Steffan does an admirable job making the magic of these ideas approachable, especially for those unfamiliar with the symbol and its applications. As such, it is a valuable workbook and an invitation to be initiated into the practical use of this previously secret knowledge.”

One comment on “Soule’s Enneagram (via Bennett and his students): Accomplish the Impossible or NTS”

(c) 2015-2021 All & Everything International Humanities Conference, Web Credits | Conference Terms of Use